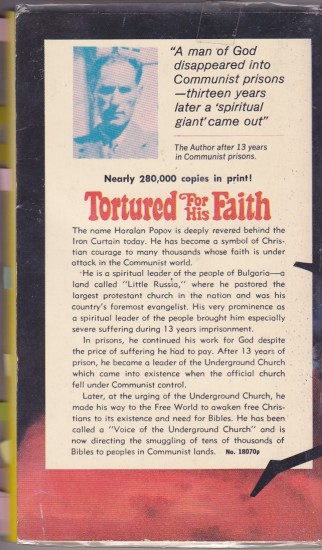 We had heard of our fellow-Christians in Russia and what they had suffered, but little did we know that Bulgaria would become so like Russia it would be - and still is called "Little Russia."
....... (omitted) .......

The first sign that our time had come was a whispering campaign to slander the country's leading pastors.  Despite this campaign, revival spread and new churches formed so the government devised a more subtle procedure.  Gradually the pastors of the churches were taken away and replaced by persons who would be "willing tools" in the hands of the communists.  They concentrated on putting their puppets into the pulpits.
Dedicated pastors soon found themselves displaced and could get only menial jobs such as streetsweeping.  When puppet pastors had been put into many pulpits, the next target was chosen: the top Bulgarian church leaders from Baptist, Methodist, Congregational and Evangelical denominations.  I was one of them.
A vicous slander campaign started.  We were accused of being "spies."  Better "spies" than Christain martyrs.  We were described as "instruments of imperialism."  At first when I heard this I laughed, asking Ruth, "Well, how do you like being married to an 'instrument of imperialism?'"
"So that's what you are!" Ruth laughingly replied.
The real truth meant nothing to those who were determined to destroy the Christian Church.  We, the fifteen leaders of Bulgaria's Evangelical denominations, were publicly named.
It was obvious that we were not guilty of the charges laid against us, but a smear campaign was started to distort all that we had said and done in order to blacken us.
It was noised about through the press and other media that we had betrayed our country to the English and Americans.

....... (omitted) .......  Paul and Barnabas told the disciples in Asia Minor, "we must through much tribulation enter into the kingdom of God"(Acts 14:22).
The Apostle Peter says the same thing (IPeter1:6-7) "Wherein ye greatly rejoice, though now for a season, if need be, ye are in heaviness through manifold temptations: that the trials of your faith, being much more precious than of gold that perisheth, though it be tried with fire, might be found unto praise and honour and glory at the appearing of Jesus Chrst."

Man's first natural reaction when lookng at suffering is to think it is too hard to bear.  We try to avoid it, but later we find that the suffering becomes of great value and is more precious than gold.  Suffering was a fire which our churches had to undergo so that all that was hay and stubble would be burned up, leaving the pure gold shining more brightly than ever.  In the process the "structure" of the church would be destroyed or subverted, but there would remain a true, living Church, the Body of Christ, the Underground Church.
This was all just ahead of us.
These were the events that had led me from being an ardent atheist to my position now as a pastor facing torture for Christ in the dreaded "White House."

Shortly afterward, Tsonny was taken from the cell.  A year later I met him again in another prison and he told me that Nickolai had gone to the leaders and said that Tsonny was wise to him and suspected him and they ought to remove Tsonny from the cell so he could get on with his job of helping break me.
Nickolai and I were left alone in the cell, and he picked up much information about me, which I, in my innocence, gave him.  Later, I became aware of fellow prisoners who were forced to spy on their cellmates through threats of harm to their families.  I later realized Nickolai's downcast look when we first met was from shame.  But the Secret Police quickly learned a prisoner's most vulnerable points - his children, his wife, for example, and used it without mercy.
Nickolai's job was to find my vulnerable point.  He quickly found it.  It was, of course, my wife and children.  I was worried sick about them.  Ruth was all alone, with two babies to feed and care for,  and here I was, powerless to help.

Informers were found not only in places where systematic campaigns were planned (such as the one against me); they were everywhere, in prisons, camps, homes, places of employment, and even in the congregations of churches.  To improve their own situation in prisons and to lessen their own suffering, many prisoners made themselves available as informers.  The communists cannot sleep calmly if they don't know about everyone - such as who thinks what about them, or who says what about them.  Consequently, in all Bulgaria there was hardly a cell, a block, or a place of employment, or a church which didn't have an informer who reported what was said.  It is just as bad today.

[p.41]
....... (omitted 3 paras.) .......
But they were smart also.  The sheer volume of my writings enabled them to pick out isolated incidents here and there and twist them.  Unknown to me, the persons mentioned in my manuscript were thorougly questioned and harassed.

[p.59-62]
....... (omitted 5 paras.) .......
One after another the leading Christian laymen were called before the DS and sharply told they must renounce their acquaintanceship and fellowship with their former pastors.  The newspapers began printing notices from members or leading Christians in the different congregations saying, "I express my disgust for the pastors' activities and renounce my acquaintanceship with them."
As in Elijah's day a remnant refused to bow down to Baal, and so there were those in the congregations who stood by us.  There were pastors who did not write renunciations in the papers.  However, one by one, these pastors were soon ostracized and forced to leave the ministry.  Some were even sent to concentration camps.  Others pushed broomes as street sweepers in the very cities in which they had pastored.  Many of these faithful, ostracized pastors began "underground" meetings in homes at great risk.
Soon communism came into the Church itself in the form of the "New Pastors" appointed by the DS.  Some of the young people and the more active members were sent for at night by the DS.  They were beaten viciously during the night in a way which left no marks.  In the morning, they were released and forced to promise to tell no one what had happened - not even their wives.
....... (omitted 1.5 para.) .......
Fervent Christians and active members were especially sought after by the DS.  Many were not able to hold out, and bowed to the will of the authorities perhaps in order to remain in the congregation.  Fear of being reported determined one's conduct.  In many cases, one knew who the informer was, but one never dared to say it openly because the DS could reach anyone they wanted.  I am reminded of the prediction in the Bible that man will be betrayed by his own relatives.
Many Christians in other countries can never understand how shrewd and wicked are the powers of darkness.  This is because they have never sat alone in a prison cell, completely helpless and hopeless.  No matter how many books are written about it, only those who have experienced the ways and means that were used can ever comprehend what Satan can devise to torture men.
....... (omitted 4 paras.) .......
The communists knew an outward attack on the churches would unite and strentgthen the believers, as it has done down through Christian history.  So they decided to destroy or control it from within.  The communists had found him a very willing instrument.   It was quite evident that he was a faithful supporter.  To this day the communist tactic is to close some churches and install their own men in those that remain open.

THE TRAGIC SUFFERING OF OUR FAMILIES

After the trial, we were returned to the prison, to disappear from public view.  But now it was our families as well as ourselves who suffered.  Persecution came not only from the enemies of the cross, but also from the newly installed "pastors," including Angel Dinoff.  The people were warned that anyone trying to assist the arrested pastors or their destitute  families would be sent to a concentration camp.

[p.69-70]
....... (omitted 3 paras.) .......
The Cultural Society was a circle started by the Secret Police - the DS.  In every prison, the DS set out to indoctrinate the prisoners.  Actually, the Society was designed to "brainwash" us and to supply the DS with information about all the prisoners.  The only thing that concerned them was the attitude of each prisoner toward the regime.  The prisoners were also "trained" in the circle.  At the end of the training, they were graded either "intractable" or "reformed."